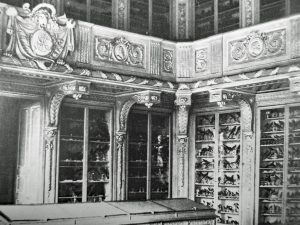 To date, 10.600 bird species have been described, of which approximately 60 % are stored in the ornithological collection of the ZSM. Most of the material is historic and was collected between 1860 and 1960, particularly in the first decades of the 20th century.

In April 1944, the large collection of mounted specimens, which was housed in the „Wilhelminum“ at Neuhauser Straße 51, was destroyed by bombing. Fortunately, one year prior, rare materials and the study skin collection were brought to more secure locations in the countryside. After the war, the ZSM was housed in the West wing of Schloß Nymphenburg.

In 1986, the ZSM moved to the new location at Münchhausenstraße 21 in Obermenzing. The ornithological collection is open to researchers.