The mammal collection of the ZSM includes skulls, skeletons, skins, stuffed skins, and alcohol preparations from about 40,000 specimens from all mammal orders, and from that, belongs to the most important mammal collections in Europe. To be added about 35,000 skulls from owl pellets, that had been prepared in the course of monitoring Bavarian small mammals between 1950 and 2005 (further details see under research projects of the Mammalia Section). 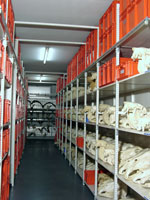 The Munich mammal collection is of special importance because of its comprehensive collections of big mammals from South America, Africa and South East Asia. Only in present in few scientific collections is such an extensive material of skulls, complete skeletons and skins from monkeys, elephants, manatees, equines, giraffes, deers, bovines, carnivores, armadillos and other mammal groups. The collections had been mainly aquired before the First World War from hunting and collecting excursions. Due to the increasing destruction of habitats for many species in the countries of origin, and anyway, collecting is not longer possible from ethical and conservational reasons, it is irreplaceable material that serves as a basis for research projects in the field of zoological systematics, as well as of comparative anatomy and functional morphology, we are dealing with here. 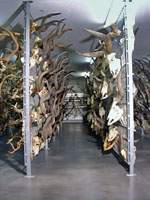 Further, the skin collection is gaining increasing importance as a reservoir for tissue, from which DNA for molecular investigation methods can be extracted.

There is also strong international demand for the primate collection, the main item containing series of orang utans, gibbons, macaques from Borneo, Sumatra, Thailand and other regions of the Malayan Archipelago. A complete inventory of the whole primate material will be available soon here. 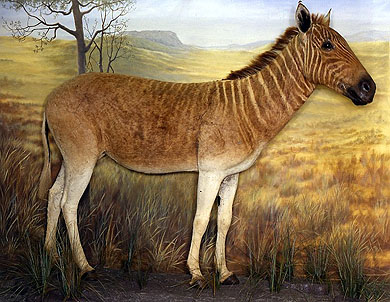 The Quagga of the ZSM.

Beside the pure study collection, stuffed skins from the original presentation collection, the so called Wilhelminum at Neuhauser Street, have been preserved. The bulk of the specimens had been destroyed in April 1944 in the course of a bomb attack by the Allies. Fortunately, some hundred of the most valuable and rare specimens had been evacuated and preserved. Belonging to them are species that are extinct nowadays and are therefore irreplaceable. It should be stressed that none of these species had been decimated or even exterminated by the collecting activities of zoologists.