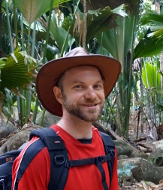 Speciation and hybridization in Orthoptera and Hymenoptera:

The barcoding projects of Bavaria (BFB) and Germany (GBOL) found that most species could be reliably identified through DNA barcodes. However, some species groups especially of insects could not, despite clear morphological distinctiveness, be distinguished by barcodes. We study this in sawflies (Hymenoptera: Symphyta) and grasshoppers (Caelifera: Acrididae) of Germany using data generated by ddRAD sequencing, which represents the entire genome in a reduced form. HyRAD sequencing, which has lower requirements to DNA quality than ddRAD, allows us the inclusion of historical museum specimens in our studies.

Our goal is to detect whether gene flow between the different species of a group continues despite efficient isolation mechanisms (e.g., grasshopper songs) or the genetic similarity is due to the recent evolutionary origin of the species alone. We also investigate the influence of ecological factors (e.g., host plants of sawflies).

The Comoros is a group of oceanic islands near Madagascar with a unique and highly endemic fauna. Unlike, e.g., the Galápagos and the Canaries, the Comoros are poorly studied by scientists. I study the phylogeny, biogeography, and taxonomy of reptiles of the Comoros and have implemented several conservation projects for these species.