an integrative approach to resolve the taxonomy of Swedish Tetrastichinae (Hymenoptera: Eulophidae)

The Tetrastichinae (Hymenoptera: Eulophidae) is one of the largest and least known groups of chalcid wasps (Chalcidoidea) and parasitic wasps in general. Identification of species and genera is often difficult. Tetrastichinae occur world-wide and species are often common in a wide range of different habitats. The females attack of eggs, larvae or pupae of some 100 families of insects in 10 different insect orders and they are biologically one of the most interesting group of chalcid wasps. Some species even attack spider eggs, mites, and nematodes. Moreover, there are species that are phytophagous and produce galls, attack hosts under water, or are phoretic on damselflies!

The subfamily is regarded as one of the taxonomically most difficult groups of Chalcidoidea, mainly because the species are morphologically very similar and small (usually less than 2 mm), and their weak exoskeleton makes them shrivel-up when they die. For this reason, very few taxonomists have been studying tetrastichines in the past.

Previous taxonomic studies on tetrastichines were exclusively based on morphological characters. Because of their morphological similarity, molecular data are of critical importance for evaluating the status of species and their limits.

We therefore employ an integrative approach, involving both molecular and morphological characters, to resolve the taxonomy and classification of the largest genera of Tetrastichinae, with a focus on the Swedish fauna. 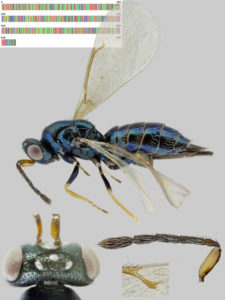 Microphotograph of a female Tetrastichus sp. The DNA barcode sequence was obtained after non-destructive DNA extraction of the specimen which was subsequently card-mounted after critical-point-drying.