The Pergidae are Gondwanan, with Australia and South America being the centres of diversity, and with no species in southern Africa. The majority of Australian pergid species is associated with host plants of the family Myrtaceae, which is typically Gondwanan in distribution. 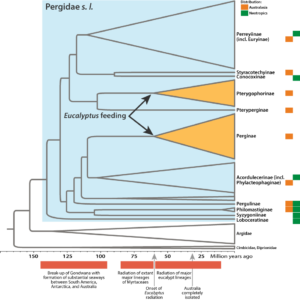 A calibrated phylogeny of the family Pergidae indicates that the major lineages within the family evolved during the fragmentation of the Gondwanan supercontinent. The split between the Pergidae and its sister group Argidae is estimated at about 153 Myr ago. No central dichotomous division between Australian and South American pergid sawflies was observed, showing that the major lineages within this group had already evolved by the time Australia had become completely isolated from Antarctica. The molecular dating analysis strongly indicates a co-radiation of Australian pergid sawflies with their Myrtaceae hosts and suggest that the two eucalypt-feeding clades, pergines and pterygophorines, colonised their eucalypt host plants independently during the Palaeocene, at the time when their hosts appear to have started radiating.

The break-up of Gondwana and the timing of the subsequent climatic change in Australia, leading from vegetation adapted to aseasonal-wet conditions to the arid-adapted sclerophyll vegetation typical of Australia, suggest that the species-poor subfamilies occurring in rainforests represent remnants of more diverse groups that were decimated through loss of habitat or host species. Chemical detoxification vs mechanical removal of host plant toxins in Eucalyptus feeding sawfly larvae

Eucalyptus leaves are notoriously rich in essential oils, some of which are strong toxins for insects that have no specific defence against them (e.g. cineole). Nevertheless, some herbivores are eucalyptus specialists, and most of these have specialized enzymes to detoxify particular components within their usual diet. Only a few insect groups have managed to adapt to such circumstances and to diversify widely on eucalypts. Of these, the pergine sawflies are unique, even among all herbivorous insects with mandibles: the larvae have a large, soft, sponge-like extension (the scopa mandibularis) on what is usually the grinding surface of the insect mandible (pictures below).