Coccophaginae are minute parasitic wasps found world-wide. They primarily attack the sessile nymphs of Sternorrhyncha, including Aleyrodidae (whiteflies) and Diaspididae (armoured scale insects). The Coccophaginae are the largest subfamily of the Chalcidoidea family Aphelinidae with over 700 described species. 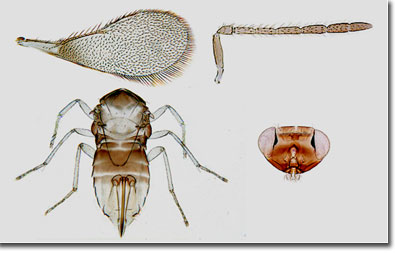 Slide mount of a female specimen of Encarsia whittieri Girault.

Encarsia is the largest genus of Coccophaginae and of the family Aphelinidae, currently containing almost 400 described species. Species of the genus have been of particular interest to economic entomologists because several of them have been used, or are currently being used, successfully for pest control.

Some Encarsia species appear to be extremely host-specific, probably the most important trait for an acceptable and effective agent. They are also of considerable biological interest in that most species for which the biology is known display heteronomous biologies, with males developing as hyperparasitoids on females of their own or other species.

The identification of Encarsia species is often difficult because of their small size and the necessity to prepare slide mounts. New species are being continuously added and there is evidence for the presence of complexes of cryptic species within several of these described species. Many Encarsia species have a very wide or even cosmopolitan distribution, complicating taxonomic revisions on a local scale. Males are often very difficult to identify without accompanying females. In several species males are not known.