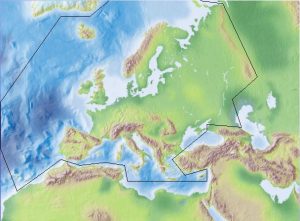 The geographical coverage of this key is political, not biogeographical, Europe. The coverage is shown in the map below, and is as follows: Iceland in the northwest, Franz Josef Land and Novaya Zemlya to the north, and Russia East to the Urals. North of the Caucasus the area includes S. Russia, Ukraine and Moldavia. In southern (Mediterranean) Europe, the following areas are included: Western (European) Turkey, Cyprus, Crete and the Greek islands and Gibraltar. A biogeographical anomaly is the inclusion of the European Macaronesian islands of the Azores, Madeira and the Canary Islands (but not the Cape Verde islands). Spain, Italy, Greece and the Mediterranean islands are the richest areas of Europe in terms of bee species diversity, although the Austrian and Hungarian faunas are extremely well-studied and diverse.

The bee genera occurring in political Europe are those included by Michener (2000), with the following exceptions: Chalicodoma and Creightonella, included as subgenera of Megachile by Michener, are here recognised as genera, while it is acknowledged that further taxonomic research is needed to clarify their status. Nomiapis (as diagnosed by Baker, 2002) is recognised here as the sole nomiine genus occuring in Europe. The probability is that all European species classified by previous authors to the genera Nomia and Pseudapis are actually referable to Nomiapis. A total of 70 genera is thus included. Subgenera included have been limited to Eucera (Eucera) and Eucera (Synhalonia), having such a fundamental morphological difference as the number of submarginal cells in the fore wing. This brings the total number of taxa in the key to 71. Since males and females are keyed separately, the total number of identifiable taxa is 142.

In the following key, data useful for identification have been divided into:

Distributional data can be extremely useful in reducing the subset of taxa that requires keying out. Rare taxa, for example, can be excluded from the identification process by applying what is effectively a distributional filter. However, distributional data are lacking for many areas, can never be precisely known and also can be expected to change. For example, with climate change, the number of bee genera in the UK might be expected to increase, invalidating any currently geographically accurate filter. Therefore it is dangerous to use distribution as a character for identification in a key, and such data have therefore been excluded.