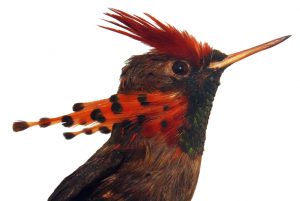 The ornithological section of the ZSM houses a historical collection of high scientific value. Most of the skins were collected between 1880 and 1960, especially in the first decades of the 20th century.

Systematic focal points are hummingbirds, Darwin finches, birds of paradise and passerines of the West Palearctic.

Outstanding collections from individual workers are those of SPIX (incl. ‘Spix-types’ like the holotype of Spix`s Macaw Cyanopsitta spixii), of ANDERSON, SOMMERFELD and DIESSELHORST.

Aside from the above, there are hundreds of mounted skins, e.g. in the famous collection of Napoleon’s stepson, Eugene de BEAUHARNAIS, the Duke of Leuchtenberg, and a collection of hummingbirds gathered between 1830 and end of the 19th century. 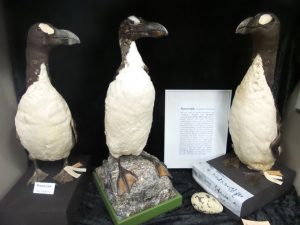 Further treasures of our collection are skins and mounted specimens of extinct species like the Passenger Pigeon Ectopistes migratorius, the Carolina Parakeet Conuropsis carolinensis, the Huia Heteralocha acutirostris, the Labrador Duck Camptorhynchus labradorius, two mounted skins and a historical replica of the Great Auk Alca impennis.

The egg collection includes an intact egg of the extinct Elephant Bird Aepyornis maximus. The historical Pross collection (second half of the 19th century) contains most of the European species. In cooperation with zoos and breeders we continually receive additions in the form of unfertilized eggs.

A large, well documented feather collection contains most of the European species.

Skulls of 600 species are at the ZSM; the bird skeletons are on loan to an institute of the Ludwig-Maximilians-University.