Developement of the collection since 2000

Today’s ichthyological collection was restored after the Second World War due to the enormous efforts and work of SCHINDLER. It comprisesover 7700 species in approx. 480 families with more than 44.000 lots and additional 1000 yet uninventorised lots. The collection was revised and completely re-organised in the magazine rooms. The handwritten cataloguing was changed to modern computer based accessioning in 2001. The type collection was revised during the GBIF project in 2005, results published in type catalogues (pre-1944 / post 1945). Databasing of the entire fish collection was completed in 2012.

Development of the Collection 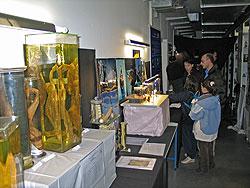 The Collection largely gained after the start of the project “Survey of the fish biodiversity of Bavarian rivers” in 2004. In co-operation with the Landesfischereiverband Bayern e.V. the project aims to build and up a comprehensive collection on Bavarian freshwater fishes and to document our regional fish fauna composition. In the course of the survey we are collecting specimens from local populations from all smaller streams and larger rivers contributing to the major drainages Rhine, Danube and Elbe, including the per-alpine lake basins. More then 2000 lots with 58 species out of 14 families have been collected so far, including more then 4000 individual DNA-tissue samples of preserved specimens.

The Collection considerably gained from recent and ongoing research projects in Ghana, Cameroon and from the Lower Congo Basin (Republic Congo and Democratic Republic of Congo).

In 2003 a marine collection from the continental shelf off Angola was purchased with a found of the Staatliche Naturwissenschaftliche Sammlungen Bayerns. The collection comprises about 9000 specimens out of 136 families (approx. 400 species, including yet undescribed species).

A historical collection of fish scales was revised and inventoried; it contains a total number of 710 scale-bags from 25 families and 34 species. This collection not only includes valuable historical vouchers of Bavarian fishes from Pre-Alpine lakes, but also material from rare species like the Twaite shad (Alosa fallax) or the endangered Perlfisch (Rutilus meidingerii) from lake Chiemsee ort the Zingel (Zingel zingel). The scales originate from private scale collections of WAGLER, LÖW and SCHINDLER. 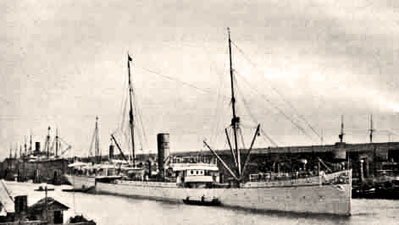 In the course of the moving of the Department of Biology from LMU-University from the Munich city centre to Martinsried, major parts of the former collection of anatomical objects were transferred to ZSM for further storage. Among them, 225 (mainly) prepared specimens used for anatomical demonstrations (139 fish species from 83 families), but also valuable historical material was included: 9 lots from the collections HABERER & DOFLEIN, among them specimens from the Sagami-Bay (Sagami-Bay, 1904) and DOFLEINS Expedition to Monterey Bay in California; historical material from the first German Deep-Sea expedition (Valdivia-Expedition, 1889-1899) and voucher specimens of Bavarian fishes, including 12 lots from HOFER and SIEBOLD originating from the Isar in Munich.

Main focus of the collection 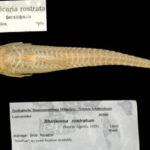 The Brasilian fishes of Spix

The collections of Erich Zugmayer and Gottfried Merzbacher 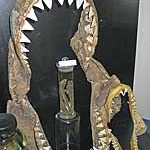 Type Catalogue of the Ichthyological Section