With more than 150,000 specimens the herpetological collection of the ZSM belongs to the biggest in Germany and in the world. According to estimates of Gruber (1992) the collection comprised about 29600 amphibians and 110400 reptiles. Since 1998 more than 15,000 individuals or lots (tadpole series) have been added to the collection and were entered in an electronic database. The biggest part of the recent additions are from the new collection focus Madagascar / Comoro Archipelago (more than 8000) and the collection of Schmidtler (> 5000) which contains predominantly specimens from southeastern Europe and the Near East.

The collection includes two magazines, one for snakes and one for all the other reptiles and amphibians. Families are ordered according to their systematic relationships. Within a family, the genera and species are sorted alphabetically. Until 1997, the whole herpetological ZSM material was listed in a total of 11 handwritten catalogues which were paralleled by a card index. Since 1998 the catalogue is continued as electronic database and every individual receives an own catalogue number and an individual tag. The largest part of the collections consists of specimens preserved in alcohol. In addition, there is a significant number of skeletons (many crocodile skulls, tortoise’s skeletons, some lizards and amphibians). Moreover, separate collections of egg shells and epidermis moultings of reptiles exist. Geographic focuses of the collections are Europe, Madagascar, Turkey and Greece, South America and South-East Asia. Bigger collections from different South American countries (Venezuela, Brazil) and south-east Asia (Sumatra, Borneo, Sulawesi) are still poorly explored and unidentified. In future we plan to make some parts of the collection publically available via the herpNET database . 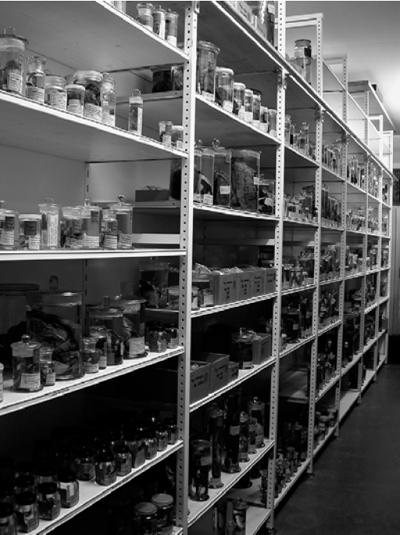 In spite of big losses during the second world war the collection houses currently primary types of 283 taxa, nearly 70 resulting from new descriptions during the last 10 years. More than 100 additional, identified new species are already catalogued in the collection and wait for scientific description. With the publication of the type catalogue of the reptiles in the ZSM (Franzen & Glaw 2007) we have finished the time-consuming revision of the destroyed and extant historical type material. The corresponding type catalogue of the amphibians was published in 2006(Glaw & Franzen 2006).The types of Spix and Wagler were already revised by Hoogmoed & Gruber (1983). Pictures of most primary types are available at GBIF-Vertebrata

For most of the new specimens catalogued since 1998 extensive accompanying data are available (including geographic coordinates, many photos of living individuals and call recordings of frogs). From almost all individuals from Madagascar and from the Comoro Archipelago as well as many other ones tissue samples are available and DNA sequences of many specimens were already published in Genbank. Numerous additional DNA voucher specimens will be added by running DNA barcoding projects about the reptiles of Madagascar, the herpetofauna of the Comoro Archipelago and by the project “Barcoding Fauna Bavarica”.

The tadpole collection of the ZSM has grown rapidly as well. The tadpoles of numerous Malagasy species have been identified by intensive use of DNA barcoding (based on 16S-sequences), and many have already been described (> 50 species based on ZSM material).

Hoogmoed, M. S. & U. Gruber (1983): Spix and Wagler type specimens of reptiles and amphibians in the Natural History Musea in Munich (Germany) and Leiden (The Netherlands).- Spixiana, Suppl. 9: 319-415