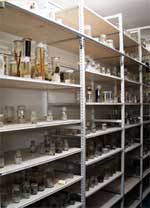 The material of the section predominantly consists of marine animals. Cnidaria and Echinodermata represent the most important taxa.

Among the cnidarians mainly the Hydrozoa but also the Anthozoa are of significance. The Hydrozoa comprise about 5,100 samples; slide-micropreparations and wet (ethanol) material. These samples contain a high rate of type material, mainly from original descriptions of E. Stechow. In addition, there is a considerable number of type species that Stechow acquired by exchange. The geographical focuses are the SE coast of Japan, the NW Mediterranean Sea, the Caribbean and the American west coast. The collection houses material from many classic oceanographic expeditions – most important that of the German deep sea expedition (Valdivia), but also from the British Challenger and Discovery expeditions and the German South Polar expedition. The Anthozoa collection also contains a significant number of type specimens from original descriptions of, for example, R.A. Kölliker und W. Kükenthal. Like for the Hydrozoa the base of the anthozoan collection is formed by material from the Doflein-Haberer expeditions to Japan.

The Echinoderm collection contains specimens from all oceans. The most significant portion of this collection is represented by the specimens examined by L. Döderlein that have been collected at the Japanese SE coast and the tropical indo west Pacific Ocean. In addition, there is material of numerous scientific expeditions that has been given to Döderlein for examination or which he received by exchange. Of particular significance were the Semon expedition to Ambon and to the Thursday Islands, the German deep sea expedition Valdivia, the German South Polar Expedition, the Siboga expedition, the Doflein expedition to Japan as well as the material collected by Schutz in South Africa and by Michaelsen and Hartmeyer in Southwest-Australia. By exchange with the University of Würzburg Döderlein received specimens examined by Semper und Ludwig. In recent times, material from Meteor expeditions to NE and S Atlantic Ocean as well as the NW African Continental shelf and Polarstern expeditions to the Antarctic could be received. The collection contains 220 type species samples, the majority of which (75) stems from Japanese waters. 59 of these were both collected and described by L. Döderlein. In total 139 type species samples originate from the latter scientist.

There is still a considerable amount of unstudied and unidentified material from various expeditions (mentioned above). In particular the extensive material of Porifera, Polychaeta, Bryozoa or Brachiopoda of the Doflein Expedition to Japan is to be mentioned here.

Ruthensteiner, B., G.-B. Reinicke & N. Straube, The type material of Hydrozoa described by Eberhard Stechow in the Zoologische Staatssammlung München. Spixiana, in press.