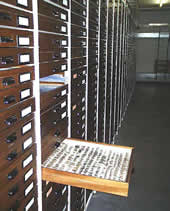 The dry collection (photograph at right) is housed in about 2200 standard insect drawers. The arrangement of families approximates the phylogenetic sytem. Within each family the respective main collection can be followed by an addendum housing any surplus of determined specimens, and then by undetermined material, which can be quite extensive. The species inventory and corresponding specimen numbers of determined material in the dry collection have been entered in an electronic database. 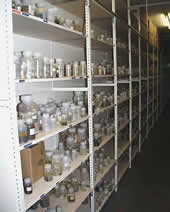 The extensive alcohol collection (photo at right) comprises about 9700 containers of various sizes (mostly PVC bottles) each of which houses one to many smaller vials, etc., that contain the actual specimens. The total holdings of this part of the ZSM Diptera collection amount to millions of alcohol-preserved biological objects. The arrangement of families approximates the phylogenetic sytem. In several family-group taxa, e.g. in Chironomidae, Limoniidae and Mycetophiloidea,much of the material has been separated in bottles at species level; other such groups have not yet been sorted further than by family. Considerable parts of the determined alcohol material have been entered in an electronic database. In addition, there are extensive holdings in various stages of sorting from all world regions, e.g. drift or light-trap samples of forms with aquatic juvenile stages (mostly Chironomidae) from the Amazon, light-trap catches from Thailand (ex coll. H. Malicky), scoop and light-trap samples from southern Europe, etc. The collecting data for such more or less raw samples have been entered in an electronic database as well. 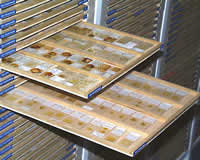 The collection of microscope preparations contains about 60 000 slides, the vast majority of which carry one or more life stages of Chironomidae. Most of these are stored on drawers (photo at right), sorted alphabetically by genus and species. Additional material, kept separate for various reasons, can be found in one of over a hundred standard slide boxes. The mounting medium usually is either Euparal or Canada balsam. The species inventory and further details on the preparations collection have been entered in an electronic database.

The Chironomidae collection of the ZSM Diptera section contains representatives of about 2700 scientific species names and from all world regions inhabited by those non-biting midges. Nearly all of the thousands of literature titles on the taxonomy of this insect group, which is important in various biological research disciplines, are accessible at ZSM. With this combination of resources the ZSM collection on Chironomidae ranks among the most valuable of its kind worldwide. It is based predominantly on a donation from the former Max-Planck-Institute of Limnology in Plön (A. Thienemann and F. Lenz estates) and on the activities of E. J. Fittkau, F. Reiss and coworkers. The holdings of described species correspond to around 80% of those in the Palaearctic Region and roughly 50% of the world fauna. About 850 scientifically named species are represented by type material, with geographic focal areas in the Amazon region and Central Europe. A general collections list and catalog of type specimens is available electronically.

Since the ZSM tenures of E. J. Fittkau and F. Reiss numerous scientific publications, doctoral and other academic theses, etc., have been produced at the Diptera Section and/or with some of its material. In accordance with the value of the corresponding collections and information resources, the Chironomidae are intended to remain a major research focus at this department. Within the section this tradition is currently continued by Martin Spies; a number of German and international colleagues keep making important contributions as well. For future projects the collection holds practically inexhaustible material from all world regions that is undescribed but often already available as microscope slides.

The ZSM Diptera Section’s collection of mycetophilids, with around 800 species one of the most important of its kind in Germany, is based mostly on the work of E. Plassmann. About 92% of the species recorded from Germany are present, largely in the alcohol collection. An electronic inventory is available.