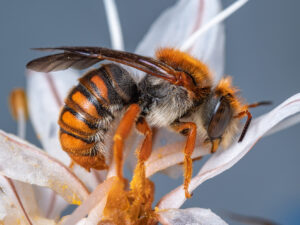 Wild bees and other aculeate insects are highly threatened and, like many other insects, are severely affected by the decline in species. In order to be able to protect these organisms, it is important to reliably identify them and to gather further knowledge about the species. With a new, worldwide unique online picture gallery of bees, wasps, ants and other Hymenoptera, the Zoologischen Staatssammlung München (SNSB-ZSM) would like to contribute to better knowledge of species, in particular among the general public. The web gallery is intended to appeal to nature lovers, but also researchers, in order to bring this group of insects closer to them and to facilitate species identification.

The picture gallery especially for bees, wasps and other Hymenoptera (https://snsb-zsm.pictures) is based on a new concept in which insect photographers submit high-quality digital photos of living insects. These are determined and verified by experts from the Zoologische Staatssammlung München and will serve as reference photos in the future. At the same time, the specialists also make images of prepared specimens from their own collections available. The aim is to build a digital reference collection. In order to be able to use the data for further research such as species extinction or climate change, collection data should also be recorded. 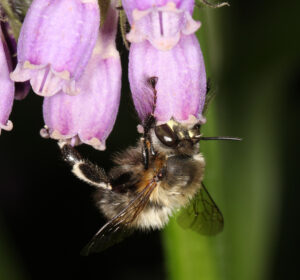 Male of the Anthophora plumipes. The species is a common garden visitor. (Photo: Christian Schmid-Egger)

The website thus offers reliable information on the species shown and provides a unique insight into the life of bees and wasps using photos. The gallery is constantly growing: it already includes more than 3,000 photos of more than 800 species. In Germany there are about 600 species of bees and 500 species of aculeate wasps. Another 10,000 species belong to the parasitoid wasps. The database is to be expanded initially throughout Germany and later worldwide.

The project is one of several citizen science at the Zoologische Staatssammlung München. The picture gallery is also an important addition to ongoing projects to create a DNA barcode library of German animals. DNA barcoding has been carried out at the Zoologische Staatssammlung München for over 10 years as part of several major projects, such as the current project “GBOL III: Dark Taxa”.